M102 is a difficult object for my setup and conditions. It is, apparently, known as the “Spindle Galaxy”.

A five or six times blowup of the above image does manage to show the “spindle”, barely: 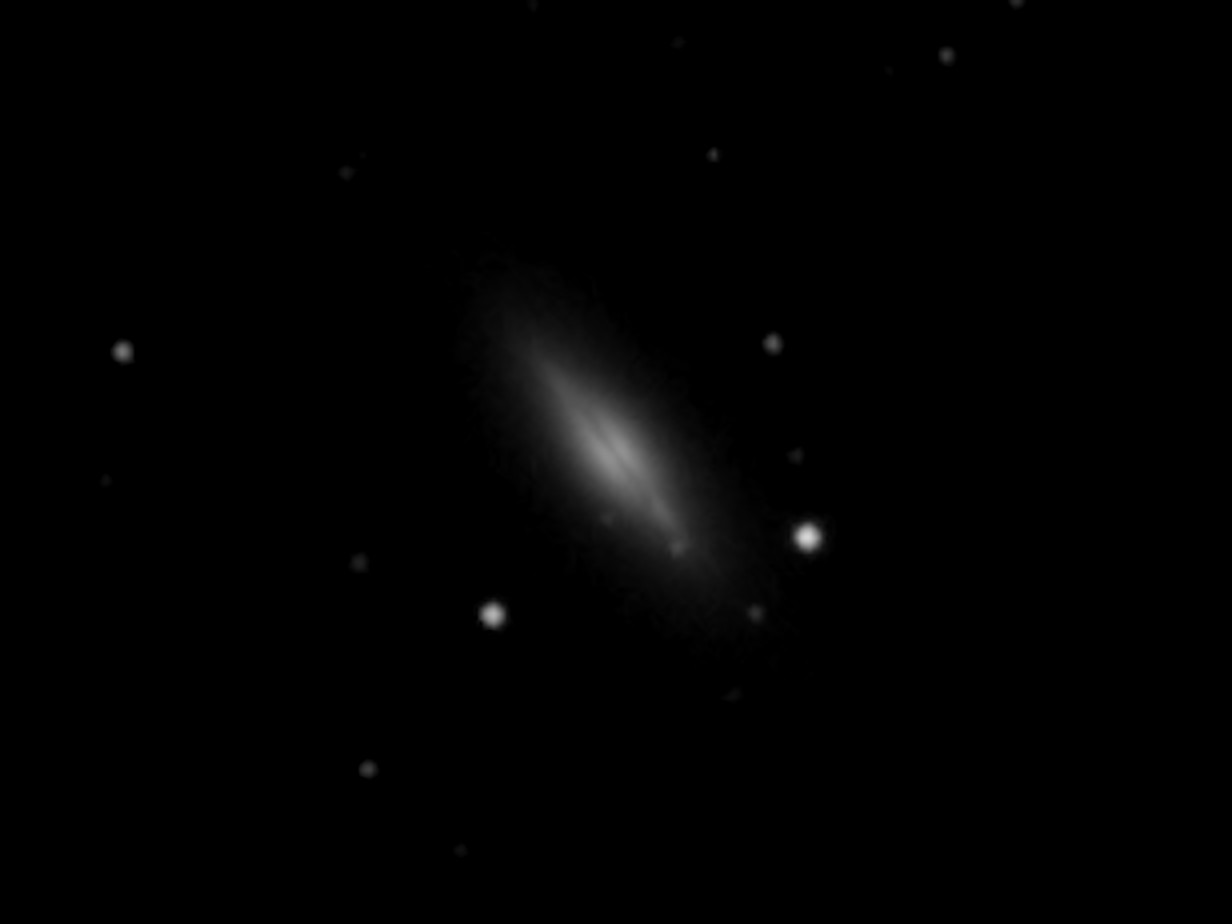 This Hubble image gives a better idea of how it got the name.

I am slowly accumulating more time on M101. This image is over 8 hours total exposure, under generally poor conditions — not quite double the previous version. It’s a good thing the telescope mostly runs unattended.

The blurred spot in the lower right corner is NGC 5474, a true physical companion of M101 that is classified as a “peculiar dwarf galaxy”.

The above image is without noise reduction processing.

And here it is with Gimp’s noise reduction algorithm:

It is hard to tell the difference. A large-screen monitor is probably helpful.

[Edit: I tried looking at this post on my phone. The experience is just not the same as on my desktop monitor. Well, duh.]

April Fools is a widespread tradition, so I am suspicious of this placard posted on the walls of Castle Wertheim.

Well, I managed to collect a few more photons from NGC3718, and the result is marginally better. Marginally: the black of space is a bit smoother:

I can skip over to Google and find a hundred images of this object with more color and detail, but the process of collecting light in the cold dark yourself makes it all real.

Here is a small target for my telescope. The “black eye” is discernible, but only on close examination can any other structure be seen. It’s sometimes called the “Evil Eye” galaxy; this Hubble View makes that case very well. The idea that there are two counter-rotating stellar populations is mind-boggling.

In my early 20s, I purchased a used car from a friend for $300, a red ’59 Chevrolet Impala with faded paint and many dents that he had named “Big Red”. Big Red ran well, and gas was cheap back then.

Big Red served me well, but one day it wouldn’t start, and instead of paying for a repair, I bought another cheap car. Big Red sat unnoticed on a Stanford parking lot while I moved a couple of times, traveled some, and got a job at a Pizza Parlor in Palo Alto.

It was part of a chain, “Straw Hat Pizza” — we wore styrofoam versions of a traditional boater straw hat as part of our uniform. As of this moment, Straw Hat is still in business, with, according to Google, 23 outlets. I haven’t been in one for maybe 35 years.

The kitchen was in the northwest corner, with large windows on either face. During the day, we could watch the parking lot and the street while we made pizzas. At night the glare from the interior lights blocked the view, and only passing headlights were discernible from inside.

Some nights we played old silent movies with a jangly piano soundtrack — mainly Buster Keaton and Charlie Chaplin. We saw them a thousand times, and the soundtrack became a low-grade annoyance of the job.

One evening the parlor was quiet; everything was clean, there were no to-go orders, the dining area was empty. The movies were off.

Through the window, I watched a pair of car headlights circle the parking lot and come to a stop. The entrance door flew open. Two young men rushed to the counter, where my co-worker leaned on the cash register.

But they were, as it turned out, looking for ME.

Brief introductions, then one of the young men asks:

The Stanford Police, it seems, caught him late at night removing parts from Big Red. Taking parts from a parked car is illegal unless you own the vehicle. Hence, if he didn’t want to go to jail, he had to produce evidence of ownership, even though it was currently registered to me. A bill of sale would do.

He pulled out a bill of sale form and placed it on the counter.

He was at my mercy. But also, he was relieving me of a tedious burden. I thought for a minute.

M81 is to my taste one of the most beautiful spiral galaxies. M82 is known as a “starburst galaxy”, because it is undergoing an intense period of star formation — a very interesting object.

The sky here at Songbird Central suffers heavy pollution, both light pollution and chemical pollution. Astrophotography would be unsatisfying without filters to reduce the effects of that pollution.

I’ve forgotten exactly which filter it was I used with the first photo — I think the “Optolong L-eNhance”. A good general purpose filter. The image is dim, but if you look closely and carefully, there’s lots of sharp detail.  A stack of 30 one minute exposures, for half an hour total.

The second photo was taken with the “Triad Ultra” filter, which emphasizes the light from nebulae, a stack of 13 three minute exposures and 17 five minute exposures — a little over two hours total. In this image the white light from the stars has been reduced, while the red light from the glowing gas areas is emphasized. The image is redder, overall, and there are many tiny reddish fuzzy blotches, which are nebulae within M33.

How does M33 really look?   Photos are stories, not truth. If you were a lucky human with opportunity to look at M33 through a big enough telescope, you might see something like the first picture, but not the colors in the second.  If you really got into it, you would recognize the overall shape of the galaxy, and you might even recognize details in the patterns of the stars.

[Edited to adjust the scale and other corrections.]

Sometimes I look through the viewfinder, and I am overwhelmed with pure aesthetics. I follow the light where it takes me.  This mood is relatively rare, and the results in retrospect are not always great. In fact, frequently the results are just trite.

But sometimes they aren’t.

I have never understood the contempt some photographers have for digital. I save almost all the photos I’ve ever taken.  Pre-digital photos sit in boxes, slowly fading, but the digital photos look just the same as when I first took them. It is quite possible they could look the same ten thousand years from now.

But honestly, much of the time I take pictures as memos.  Pictures out bus windows, just to remember what I saw.  Pictures of something on an ad, pictures of the wifi password at a hotel. These pictures are useful, rather than beautiful or interesting.

Here’s a picture of the almost dry Li River in China.  A memory: 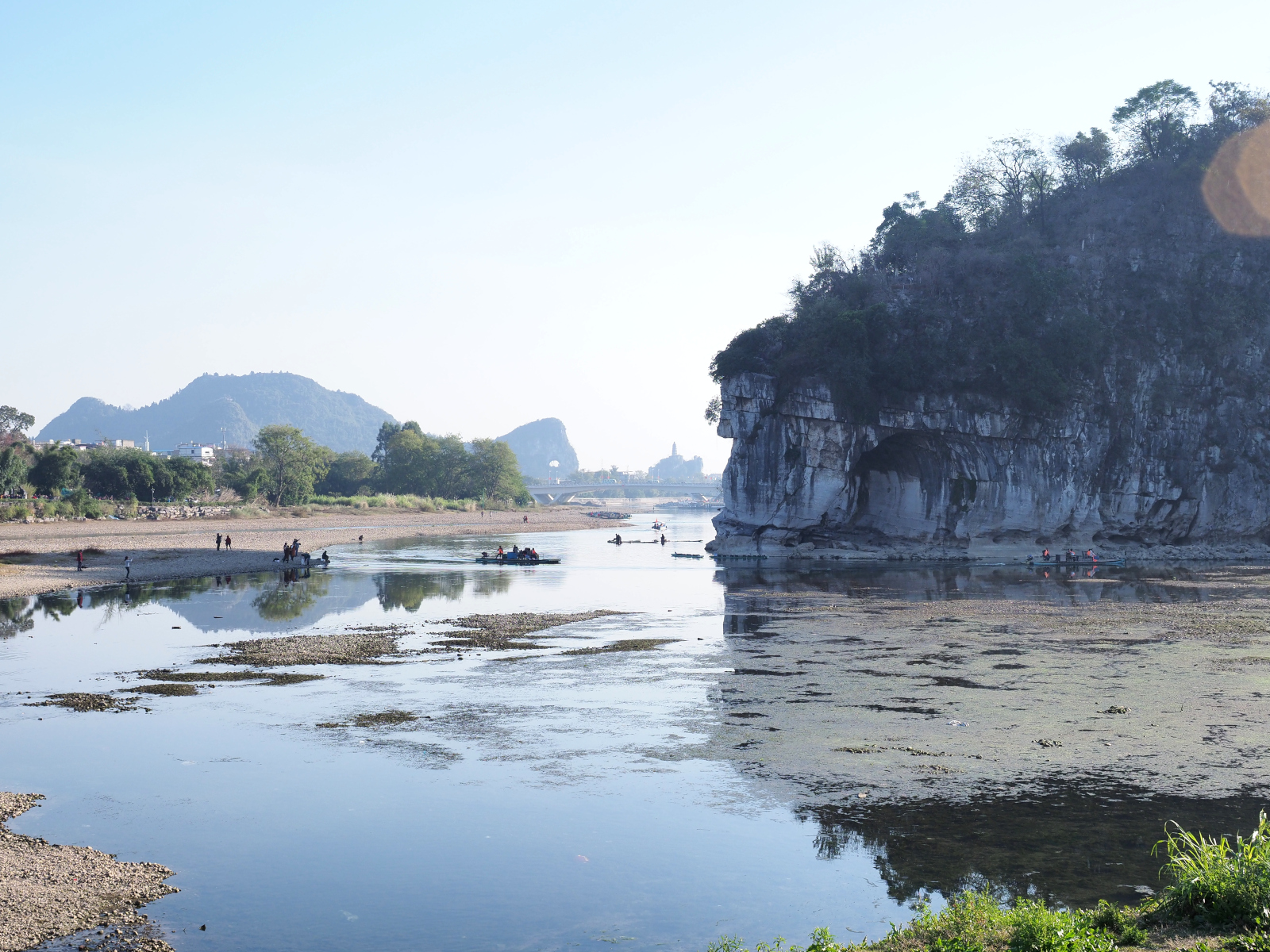