I think most good astrophotographers plan their telescope runs in advance. I am not like that — I look at the objects that happen to be visible and take pictures to see what I get. I didn’t know that IC2118 was known as the Witch Head Nebula. Now I know that it is a famously dim, difficult-to-photograph object, and I will try again: 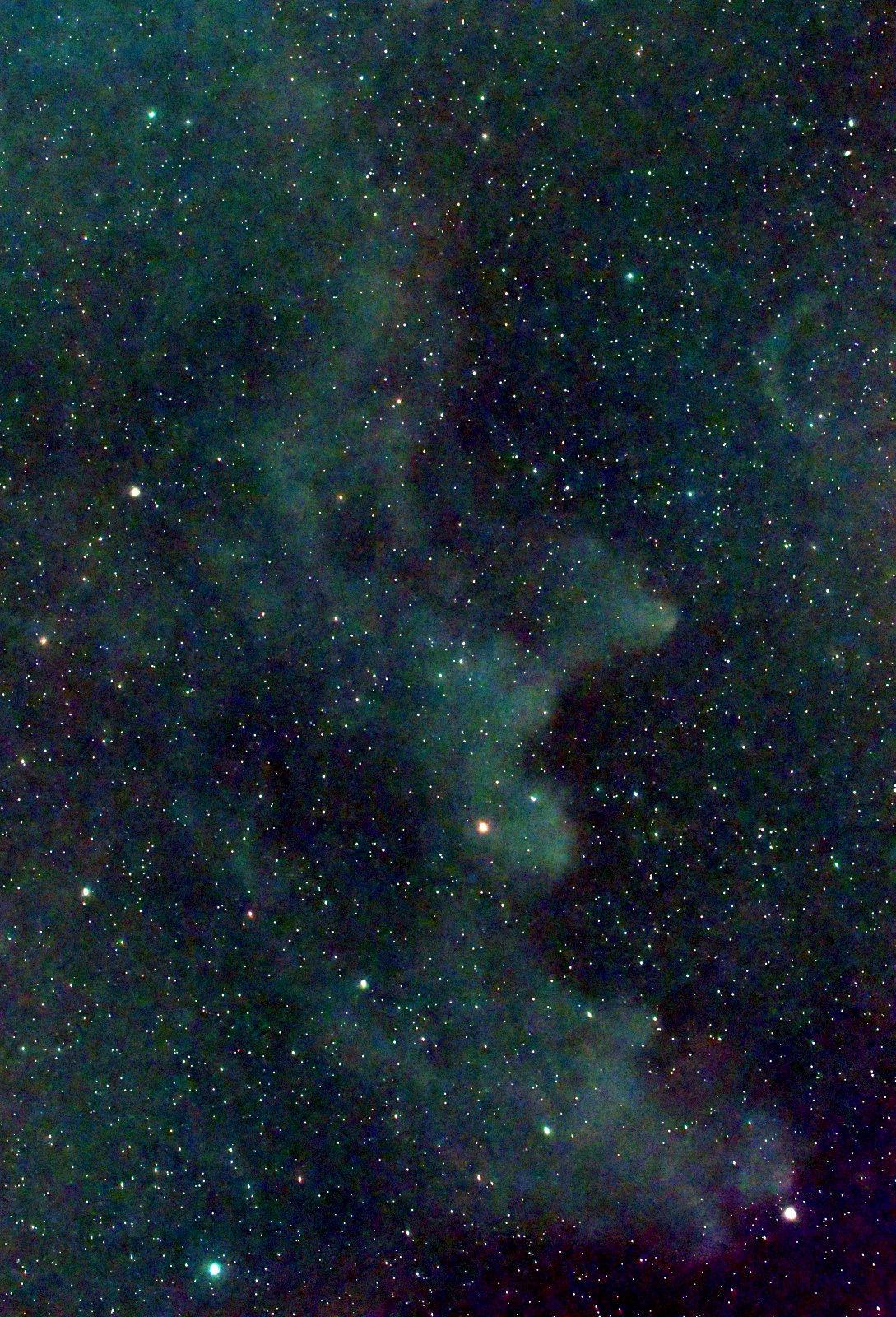 Do you see the witch? A profile view with a huge nose and an open mouth, eyes hidden in shadow. Facing right.

This was only five exposures; the individual exposures show absolutely nothing of the nebula — only through the magic of image stacking can anything be seen. 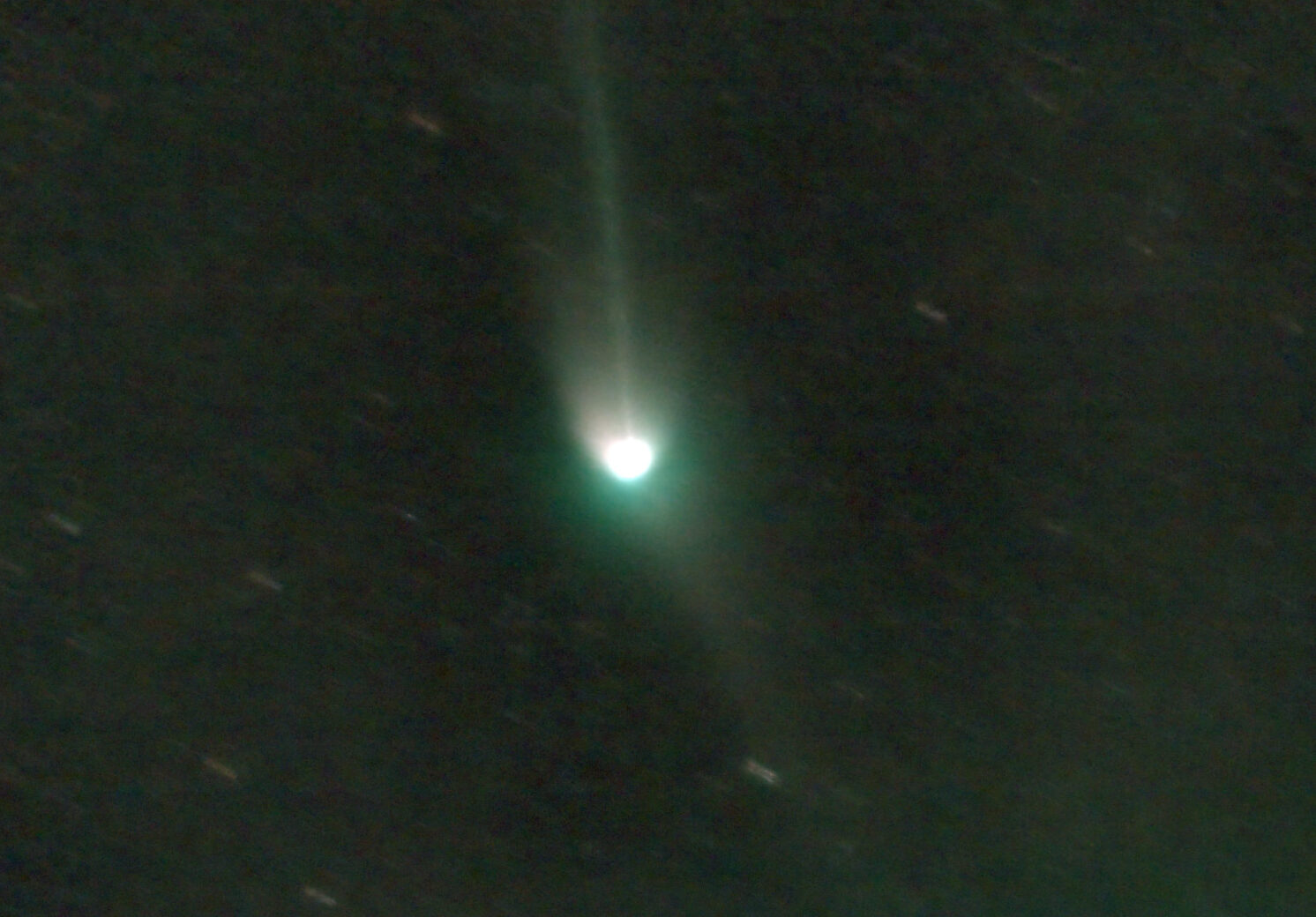 Here’s an image of the comet moving against a stationary background of stars. Same data, just processed differently: 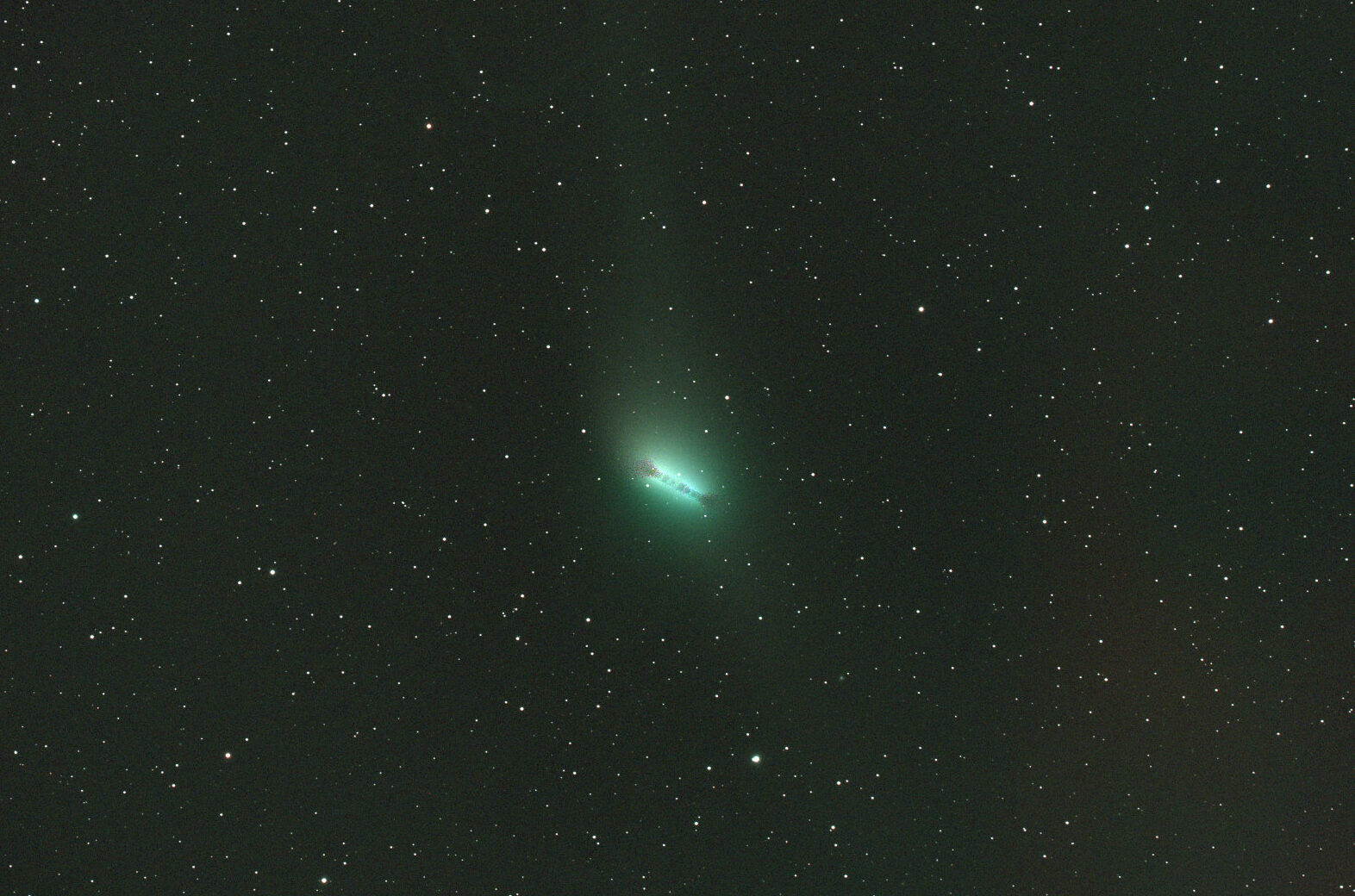 For the record, this is also comet C/2022 E3, not an exotic galaxy. The comet moves this much in about half an hour.

There are some tutorials on youtube about how to combine images like these into a composite with stationary stars and a stationary comet, but given the low-quality image of the comet, it probably isn’t worth it. Still, it would be educational. I have another run of exposures I may try to process. Best prepare for disappointment… 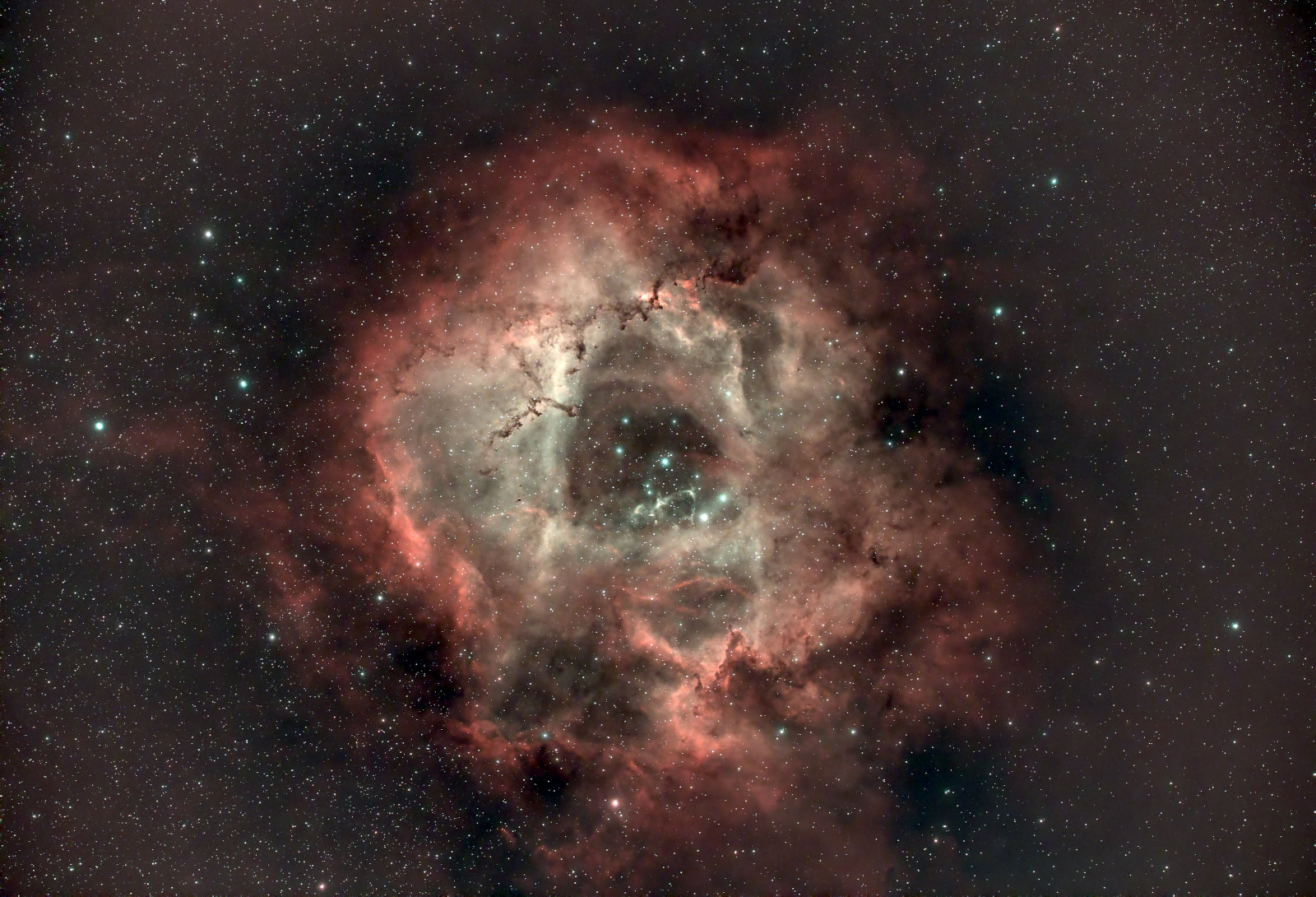 More commonly known as the Rosette Nebula, SH2-275. A quick snap as I waited for the comet to rise. The colors are a little weird, foreboding, almost. 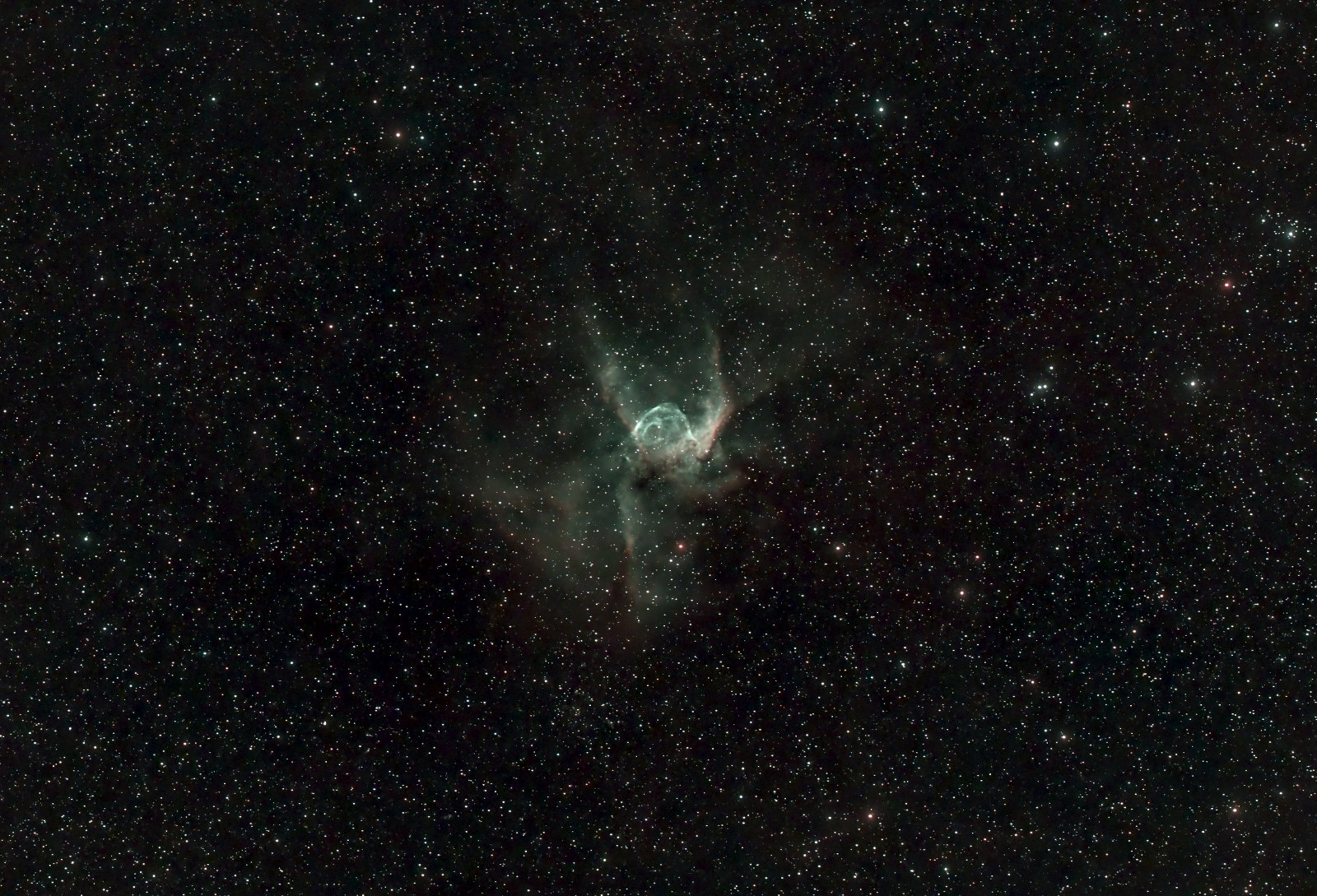 Day before yesterday, I unpacked the telescope from its tiny rain shed and managed to snag a few frames of SH2-298.  Feast your eyes on the aptly named “Thor’s Helmet”! It is a new object for me, and I was happy to get this image.

Last night I had every intention of getting an image of comet C-2022-E3. Conditions were good, but sleep overtook me. (The comet doesn’t get above the trees until after midnight.) But tonight, sky willing, I will photograph C-2022-E3.

It won’t visit us again for 50000 years. If we get our shit together we might visit it before it visits us.

By the naked eye, the night sky is only tiny points of light, occasionally blotted out by the moon. The enormous clouds of gas and dust, the majestic galaxies, are mostly invisible. So sometimes it’s nice to just see stars.

While the cluster looks more like an owl, I can also see the two bulbous eyes of a dragonfly and maybe a hint of a slender body.

I’ve purchased a new plugin for PixInsight, called “BlurXTerminator” (BXT). It uses AI trained on astronomical data to sharpen stars, and the edges of nebula.  It seems to work pretty well.

Here is a reprocessed version of the “Cygnus Wall” (part of NGC7000, the North American Nebula): 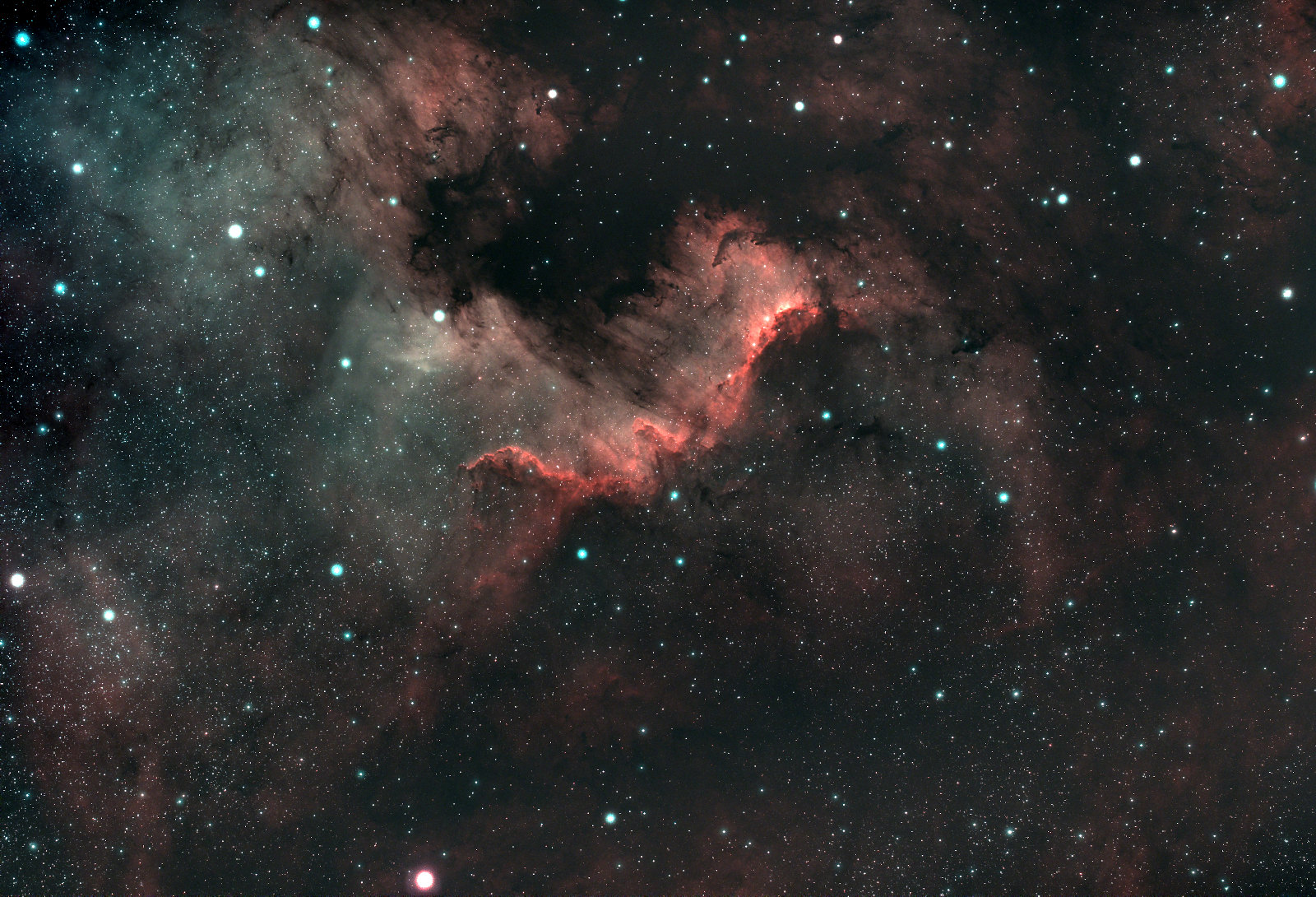 BXT actually works. This image is significantly sharper and more detailed than my previous version (though you have to look close). I worry if the new detail is “real” or manufactured? Is this picture a more accurate representation of reality?

Here is a reprocessed version of M81 and M82. The data for this image was collected back in February. 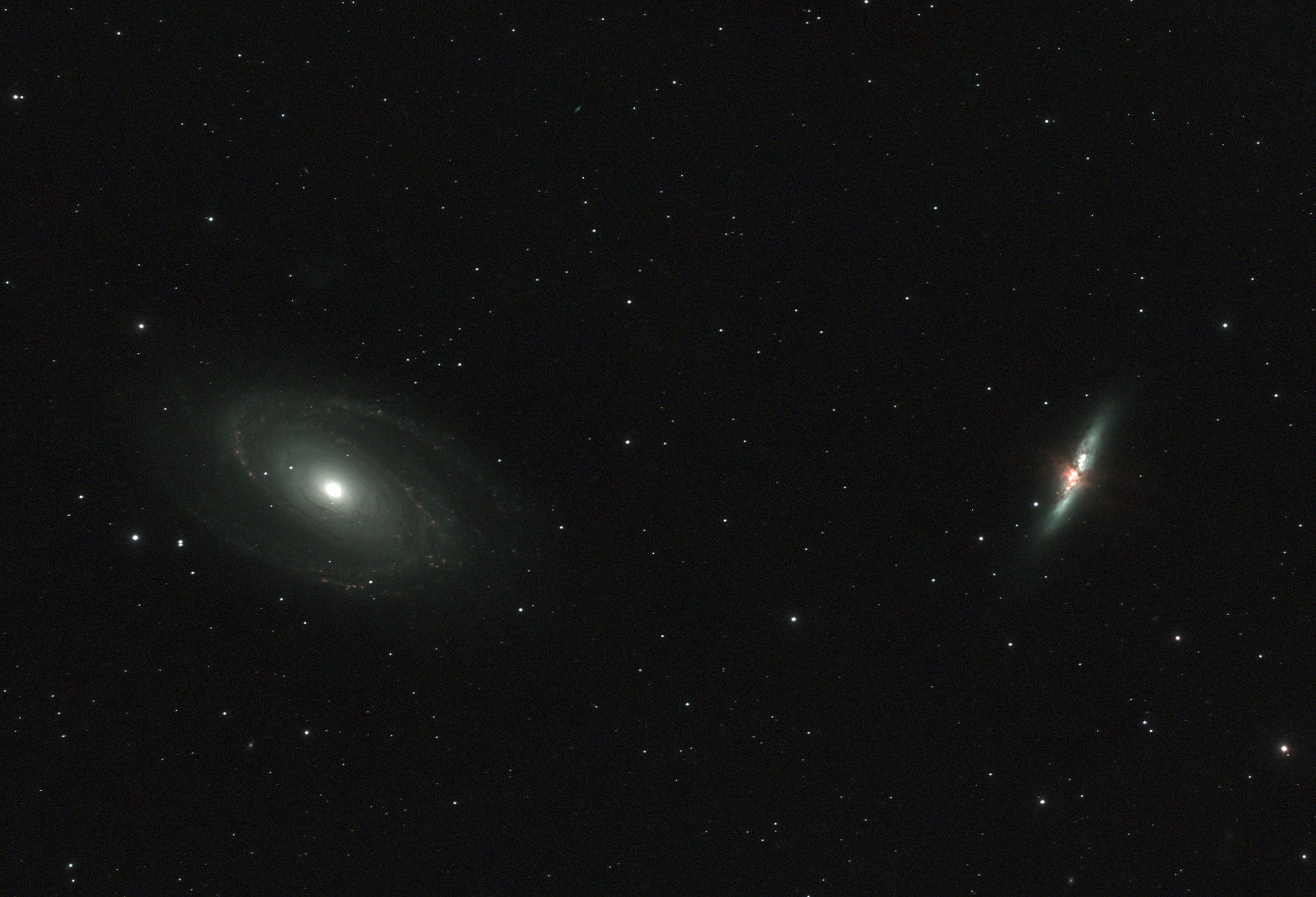 The major problem with this image is the overexposure of the central region of M81. One of these days I will work out the technique for fixing that, but for now, this isn’t bad. Once again, if you look closely, the enhanced fine delicate detail is apparent.

On a completely different topic, I started reading “A Tale of Two Cities” recently. Man, it’s so clear that Dickens was being paid by the word…

Callao, Lima is a very busy port, and since our ship didn’t move for two days, we had plenty of time to watch it. When we arrived, there were several hundred new cars parked, fresh off the boat; the next day, they were gone. My attention was drawn to these: 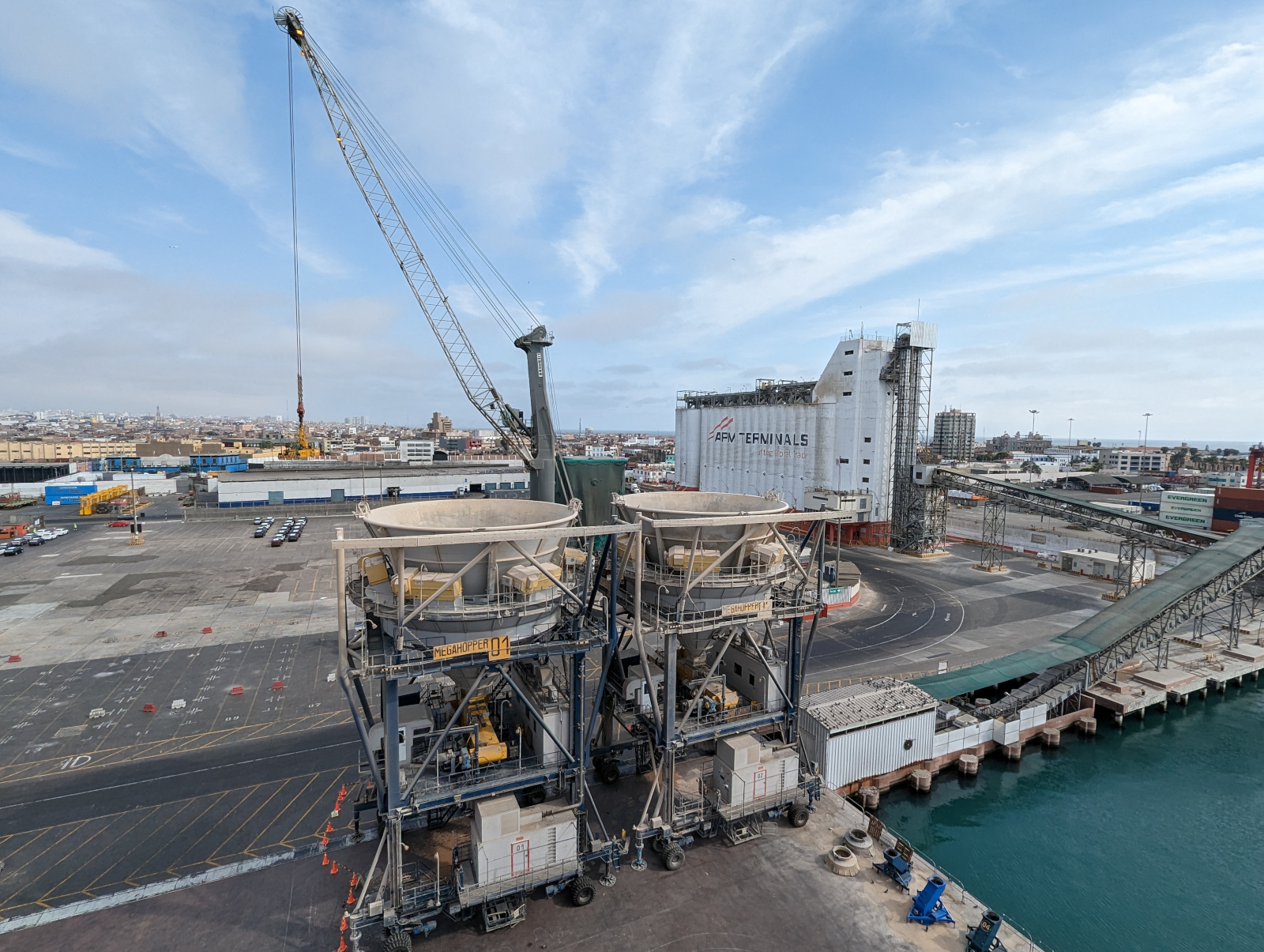 Ports are full of exotic machinery…

We arrived at the Lima international airport, and were whisked to our hotel, the JW Mariott, to recover from our 24-hour ordeal flying from SFO. The next morning we transferred to the ship where we would live for the next 21 days, cruising the Chilean fjords, then around Cape Horn.

The plan was to depart that evening, but it didn’t work out — shortly after our arrival at the airport, a serious accident happened on the single runway and blocked all air traffic for a day. There were no flights for disembarking passengers to fly home, and the passengers on arriving flights couldn’t land and thus couldn’t join the ship.

Information about the accident has been hard to find. There was a plane taking off, and a firetruck, possibly on a training mission, collided with the tail section. Two firefighters were killed, but everyone on the plane survived. However, the plane couldn’t fly, and the crash would have to be investigated. The wreckage blocked the runway for more than a day. Flights were diverted or canceled, and temporary lodging had to be found for stranded passengers from literally around the world. Several hundred people were affected.

The upshot was that the ship delayed its departure for two days while the cruise company scrambled to make new arrangements for their customers. We were lucky to get on the ship at our scheduled time. 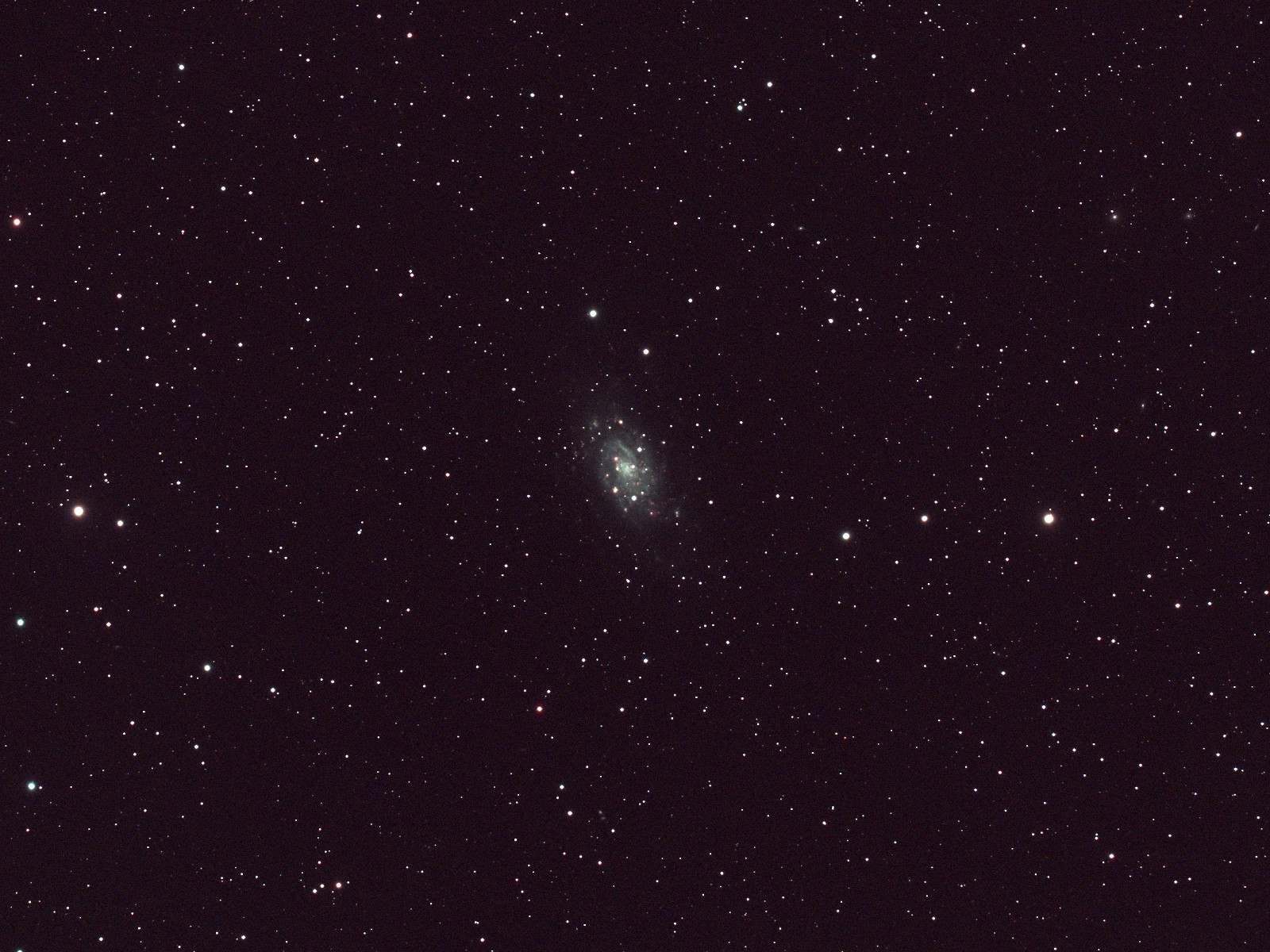 The activitypub plugin, according to the writeup at

The Fediverse beyond Mastodon

makes your wordpress blog into a Fediverse Server.  Indeed, a mastodon search found “@mosqueeto”. I’ll see if this post shows up in my timeline…