IC2574 is the faint smudge in the center, 13 million light-years away. A dim dwarf spiral galaxy. According to Wikipedia, approximately 90% of its mass is dark matter.

Taken with a 110mm F/7 refractor. Total exposure time is about 13 hours.

Sometimes referred to as “the Sunflower Galaxy”. This image has about 7 hours total exposure time.  It is quite a pretty galaxy — if you zoom in (ie, click on the picture), it looks like a swirl of altocumulus clouds on a spring day.

M97 is also known as “the Owl Nebula” — you can barely see the two eyes. M108 is known, for some reason, as the “Surfboard Galaxy”. North, by the way, is to the right.

M108 is also the galaxy on the left edge of the images I posted yesterday. The image yesterday was a failed attempt to integrate 14 separate exposures; the image above was a successful attempt to integrate 16 (different) exposures. Yesterday’s failure haunts me — I worked on it for hours. Here’s a cut from the above image of approximately the same aspect:

Striking, to me at least, is that there were two stars in this region in yesterday’s image, but only one here. I’m pretty sure that this image is a better reflection of reality…  Perhaps that is a clue about what I was doing wrong!

A colorful mosaic; an extreme magnification of an image of space at the edge of a galaxy. Two prominent stars, some bright spots that are probably just defects in the sensor, or maybe where a cosmic ray hit and produced a single bright flash. Mostly, this is just visual noise. 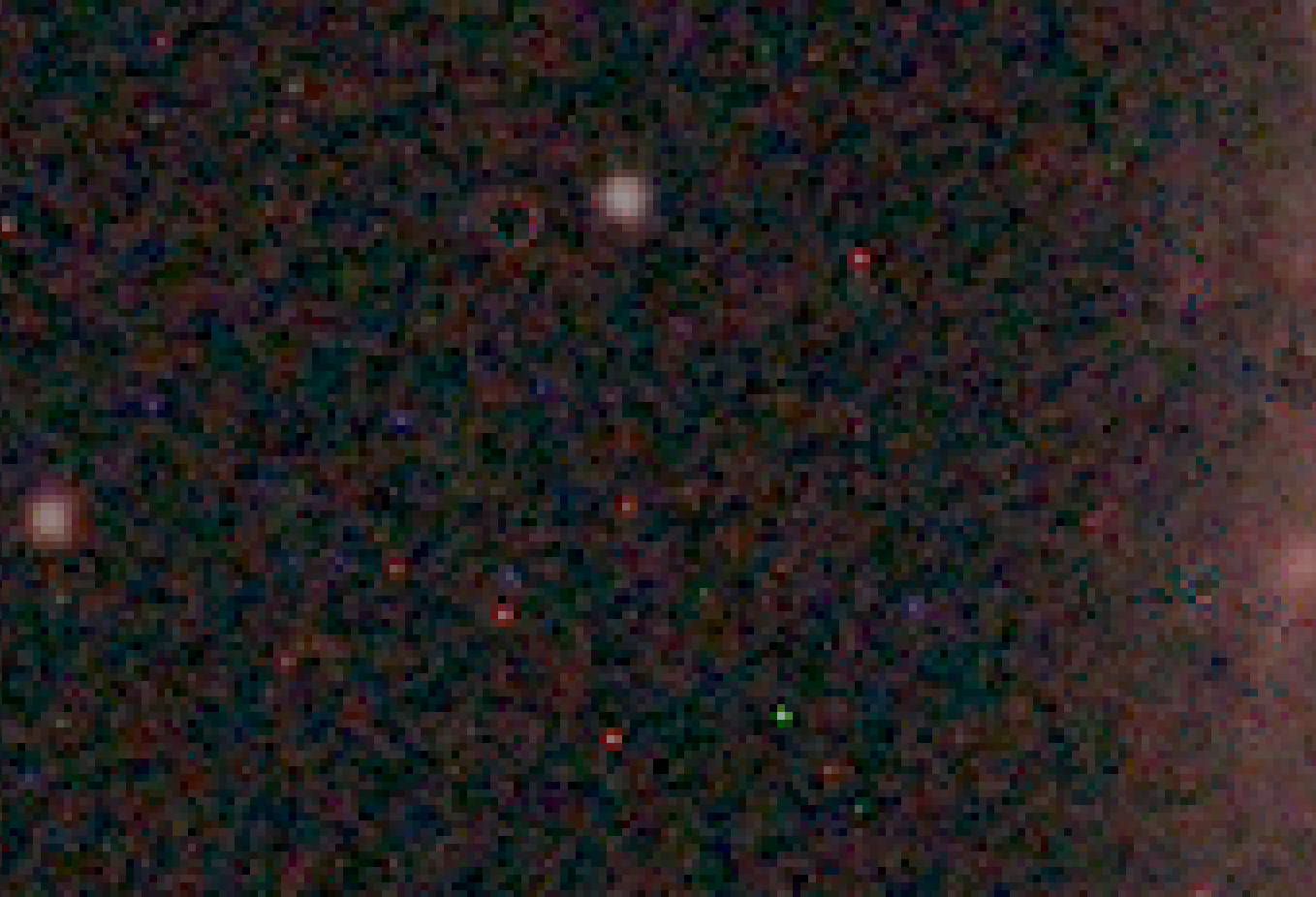 Here’s a different version, where the individual pixels have been smoothed: 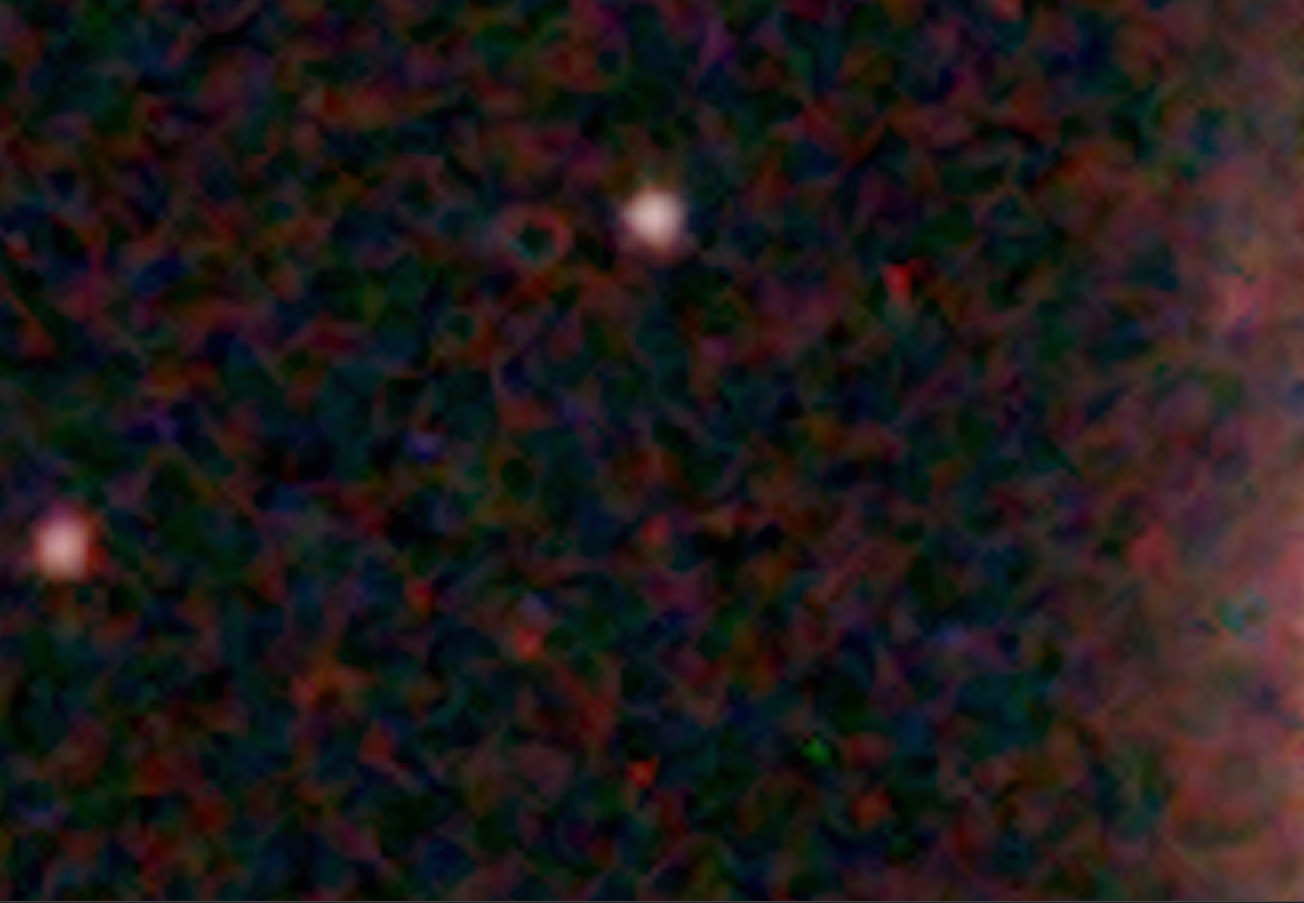 A prettified instantaneous snapshot of the quantum noise roiling across the sensor. Perhaps if I could make a movie, these would be tiny agitated multicolored ripples. But the two stars would remain, hard reminders of a real world, and the brightness at the right edge would also remain, testifying to that galaxy — M108, I’ve heard — off-screen to the right.

Edit: I’ve since discovered that one of those stars must be an image-processing artifact. So much for reality.

Another galaxy floating in splendid isolation. According to this Wikipedia article it is part of the M94 group, which is loosely bound to the extent that some members are just “moving with the expansion of the universe”.

The “tadpoles” are slightly lower left of center.  There are two of them: bright structures rather than the usual dark spots.

I imagine this was a particularly dirty explosion, throwing dark dust clouds and obscuring large patches of a dense starfield. If you look closely, there is a gritty quality to the image. 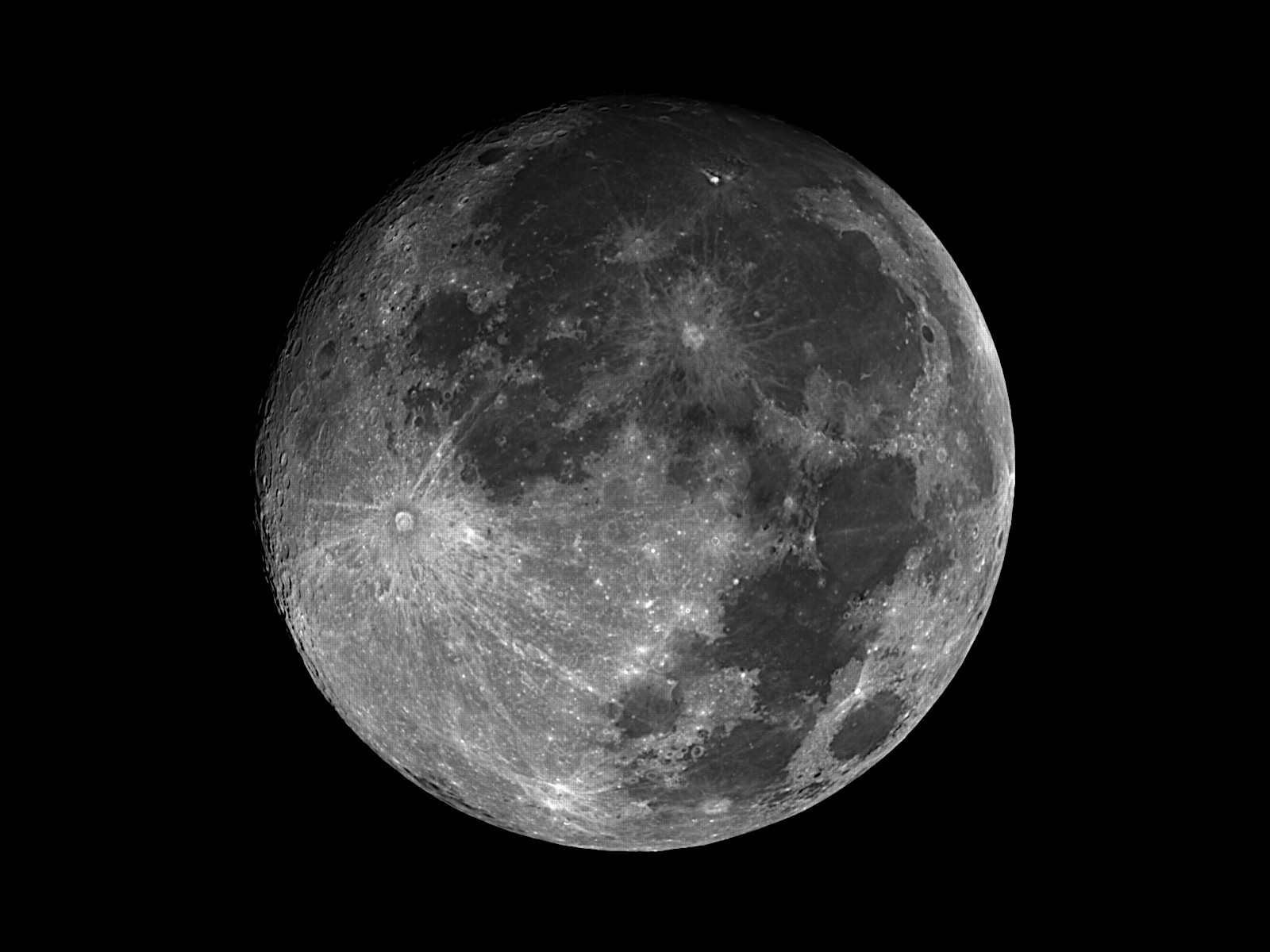 My telescope isn’t ideal for taking a picture of the moon, but I gave it a shot anyway. Not much processing, though I did try to sharpen it a bit. Kind of a bleak, burned-out cinder look here.

I managed to frame it better this time.  Here’s an annotated version:

IC342 is a large, bright, nearby galaxy that would be “naked to the invisible eye” if it weren’t for the dust in the way.

Here’s a five-minute exposure, with a gratuitous satellite:

Do you see a galaxy? Maybe if you squint and sacrifice a pint of Haagen-Dazs?

But curiosity — perhaps more exposures could tease out something?

Here are 41 images like the above, stacked up and combined:

It looks like a galaxy! I should note that these images were taken on a night with excess moonshine, in hazy suburban skies.

Three of the 41 exposures had satellite trails, but they disappeared in the average.

There is an overall red tint to the photo. It’s probably not natural, but rather an artifact of the anti-pollution filter I am using.